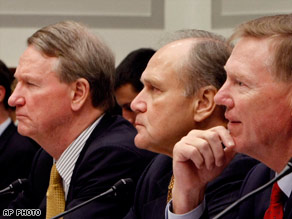 Depending on whose side you are on, this poll is bound to be controversial. In a national poll set out to determine what the American taxpayer would choose, 6 out 10 chose not to bail out the big three, a result that will obviously be crucial as far as what the government will do.

Earlier it was speculated that help would be on the way for the three car manufacturing giants but apparently they may stay that way; just speculations. General Motors and Ford have openly announced that they may not last the year and while they have been planning to lay off a large chunk of their manpower, their sales performance dip in the last two months further pressures them to consider the improbable choice of closure if no financial assistance comes their way.

“Only 15 percent say that they would be immediately affected if the auto companies went bankrupt,” CNN Polling Director Keating Holland said. “Seven in 10 say that a bailout would be unfair to American taxpayers.”

Ironically, the same taxpayers feel that even if financial assistance would be given, it would not last for long and that such would only be extending their life span but would eventually head to the same direction. So as far as the status of these big three Detroit-based car companies, it looks like they have to figure out to resolve their problems. But the thought of losing these three companies is scary for the United States as its economy sinks deeper and frantic.